Our trip, in its entirety, spanned 484 miles, and took 2.25 days to complete. We traveled north, along the 15, breaking off on the 215 for a short distance; reuniting with the 15 again through the Cajon Pass and across the San Andreas Fault. We were then riding smoothly across the North American Tectonic Plate, after leaving the somewhat mobile Pacific Tectonic Plate in our wake. We crossed in to the high desert, the Mojave: a scene mostly unchanged for several million years. The old remnants of volcanic activity dotted the land, and ancient lava-flows were piled up on all sides by the encroaching sand. It was a truly unforgettable environment. 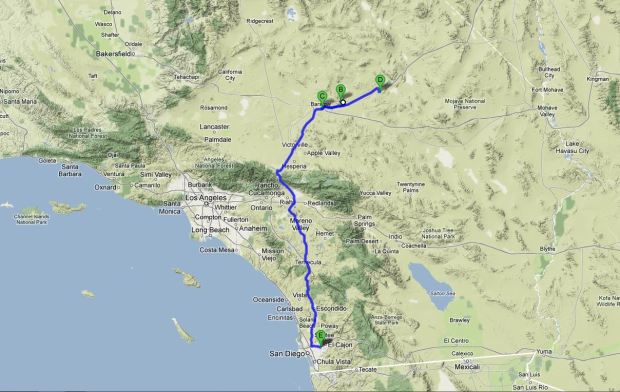 We were hardcore, and drove up there AND made the first site (B on the Google map) in one go. We were dressed for desert-combat, and fully prepared to brave the harshness of both wind and sand. But we had a good day instead, with hardly a trace of wind, and NOT A SINGLE RATTLESNAKE! For the entire trip! Amazing…

Site one was hard to get to. It was a geologic zone I identified early on as having a high-potential for gemstone output. The quality of jasper would be lower, but there would be blue chalcedony to be had there, and other varieties of quartz-family stones.

Once we got into the zone, we elevated our search past some old silver mines, and headed up the hill, to where a distinct transition of color in the soil was taking place. The farther up the hills we went, the more the chalcedony came bubbling out of the ground. It was truly, truly amazing.

In the shadow of an ancient volcano to the north, we absolutely killed it. We had well over 15 pounds of rock from the day 1 excursion. And a high percentage of that take is of amazing quality. 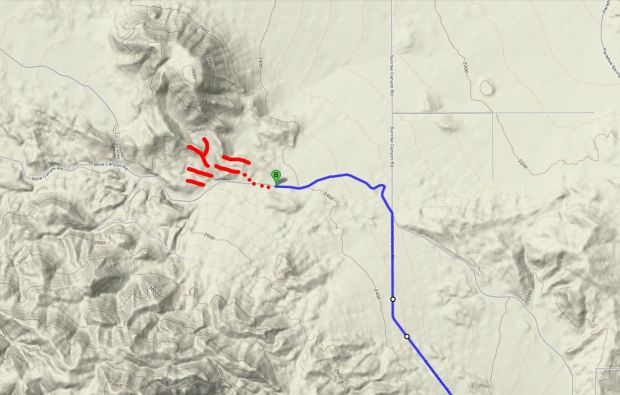 On day 2, we traveled farther north on the 15, headed for a site better known for it’s jasper as opposed to chalcedony and agate. But it was here where we landed the “big fish” of the trip. Common opal was here, though uncommon, we found some breathtaking pieces. The geologic history of this area is much the same as site 1. The intrusion of a volcano into exsisting sedimentary rock created beautiful colorful canyons and hillsides, loaded with gemstones.

The canyon walls along the Mojave river were spectacular. We headed into the hills, and absolutely rocked it. Pun intended.

Though I had low-expectations for this site, we pulled our best common opals and fire agates here. Unquestionably, the finest gemstone take I have EVER SEEN. Period. 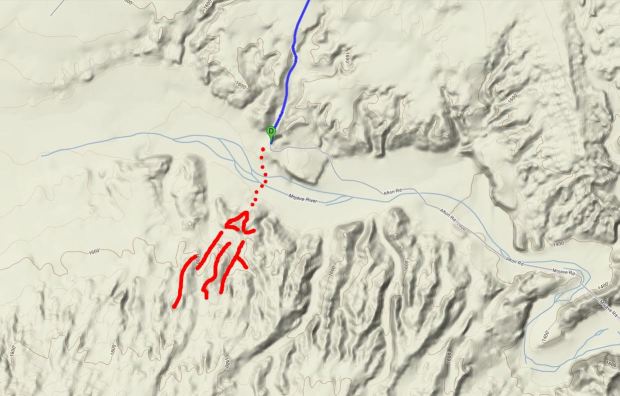 If you were looking through my previous post, The Opal Trip, it would be obvious that the sites we visited are different from the ones I had planned on visiting originally. The truth of the matter is, I failed to do the proper research on vehicular access. The first two sites were intended to be accessed via 4×4 vehicles only. I then re-shaped the plan, and found two different spots that the truck would actually be able to make it to. And although the roads were rugged and lumpy, we got to the right areas, and kicked some serious ass. In a geologic sense.

Overall, the trip was epic, awe-inspiring and fantastically profitable. We have more pure, gemstone-quality minerals in our collection now than I have ever had or seen, anywhere, ever.

I’m very happy with our trip, and boy am I glad to be back on my own mattress again. Motel mattress in Barstow = the suck.