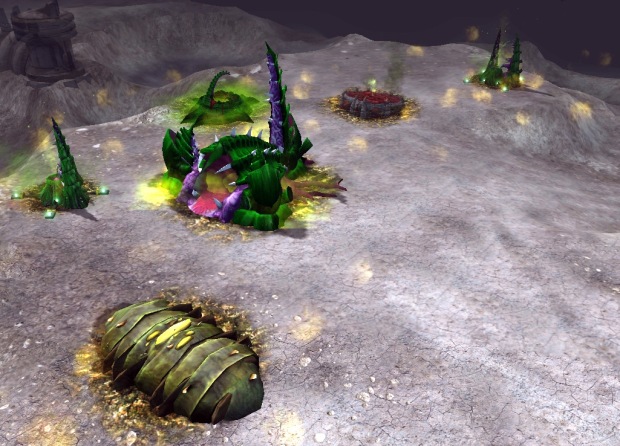 First off, let me just say that these guys got a huge makeover. Things looked, well, shabby, until now. These buildings are the core objects that the typical Tyranid base will inevitably contain. It’s ambiance, folks.

I adore this commander unit. I mean, how do you stop him exactly? The AI has no idea how to use him, or when to have him hold ground or flee. He can fly, also. Though the new model didn’t grow any wings when I researched the technology. I bet he still flies but has no animation for it. Or some such. Anyway, with those two upgrades, he’s clearly the centerpiece of the entire Tyranid army. Without him rallying the swarm, they have no hope. He seals the deal though, in a big way. He’s surrounded by a new honor guard of sorts, and he spews a cloud of pestilence all the time.

The Crushing Claws looked nice in this model’s rendering. The talons are huge. So, he’s beefcake, needless to say. Complimentary to him is the secondary commander, the Bloodlord. He’s smaller, faster, and not really intended to be the vanguard of any army, but a tactician, summoning troops and dispatching fast waves of Tyranids with little difficulty. He is a flesh wizard, summoning and upgrading himself with a series of extremity armaments and other useful things.  Like I said, he’;s not to be the front line guy, rather, somewhere in the back negotiating new troop assignments and rallying more of the swarm to the battle line.

Together they account for the fastest army in all of Ultimate Apocalypse. I’ve found the Tyranids to be boring, because they have no tech selections and are driven only to make more Tyranids appear on the battlefield and make them stronger. It’s great if you like to Zerg your opponents with a great sum of meats. I’m not a big fan of winning by digestion. They are single-resource driven, with Power serving as a “special” resource for executing Hive-Mind commands and deploying special abilities, not for making buildings or units. This can get a little, um, tiring. It’s not as much fun to balance just 1, 2 is exciting. 1 is boring. Mostly 1 anyway.

It should be noted that since the Fan Patch, the Tyranid army has a relic commander unit that has no upgrade capacity. It’s rather like a, Avitar of Khaine, but fleshier. And also very big and buff. It does nasty things to units, demolishes structures in a few swipes.

Well there you have it. I took a stab at briefly summarizing and providing some commander flavored insights. The melee damage numbers on these guys has got to be off by a mile. I don’t think it computes a new figure when you chose upper and lower extremities on the Hive Tyrant. Which is why I listed them, so you have some idea about his likely damage output.