So I’ve been competitively gaming with Will now for 16 matches, in which I have won 14 and lost 2 (87.5%). It’s been an evolving strategy, but the most recent permutation, in which XV8 Sunfire Battlesuits are my primary unit, I’ve run the board against every single opposing unit, every time. The lynchpin of this entire transaction is the XV89 Bodyguard command squad. As I have detailed in the past, That squad is beefy, and clearly the best tier 2 thing the Tau Empire can build. They get stronger at tier 3, once I buy the ranged Tau weapon tech. Tau weapons get 2 upgrades, one at tier 1, the other at tier 3. It makes most rapid fire plasma units hard to stop. Anyway, the XV89s are essential, and behind them I bring the XV22 and XV89 commanders. They have a shield, and can sit in fire and take immense amounts of damage, and return heavy DPS. Once they level past 4, they usually have all their special weapons and armor improvements, which makes them even insaner. The XV89 commander has a grenade launcher which knocks down clusters of infantry at a time, and it has a 2 second reload time. He makes mayhem. But more to the point, I can usually count on the XV89 Bodyguards to handle damn near anything attacking me as I’m quietly leveling to tier 3. With 5 command units total comprising my ENTIRE offensive force, I can drive off any form of assault and not lose anyone, and then reinforce them with Sunfire Battlesuits and Hammerhead Gunships. It’s really, really hard to stop that.

The real question I have here is that: are the XV89 Bodyguard command squad OP? If I don’t turn their shield off, they can sit there with no shield and still take a beating and not die. If you don’t have poison, or fire, they’re not at all easy to destroy. Will has put 6 full, outfitted infantry battalions against my  1 (3 unit) command squad and been soundly defeated. He says that those infantry units were specifically upgraded and equipped to deal with heavy infantry and vehicles, of which battlesuits both count, I think, and even that was no go. I, at the moment, have no real logical answer for his predicament. I suggested using poison, which he tried with an area of affect thingie, which was also ineffective. I have yet to have him try fire or plasma, which may incur success. I’ll keep you posted as the next time we are likely to get together tomorrow. 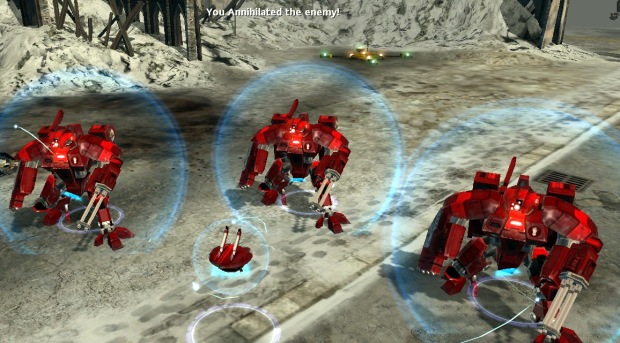 In the mean time, I’ve been cruising at +14:30 minute victories, peaking around the +10:00 minute mark in tier 3. I can get through the tiers pretty fast, and faster depending on the map, and how quickly I can get to the resources, and how much walk-time there is between points, and so on. Hammerheads are deadly good, fire a ton of rounds, and have a multifunction upgradable main gun with 4 customization options beyond the default. XV8 Sunfire Battlesuits have anti-infantry or anti-armored vehicle weapon customization options per squad of 3. I can adapt on the fly, and mix the weapon upgrades on my XV8s in order to get the most effective use of them, cutting down specific classes of units in targeted, coordinated strikes. I make good micromanaging decisions with what little actual standing infantry I will allow to enter the mix. Usually my barracks is in use making battlesuits, but I wills stop and make a squad of Fire Warriors… but mostly because battlesuits can’t cap points. Fuckers. They think of everything. Make me build 1 pathetically outclassed infantry squad and run them around the battlefield capping points surrendered as my army destroys any and all unfriendly listening posts en route to domination.

I wish I knew the Chaos Space Marines better, but frankly, I’ve grown so nostalgic over them that it only ever reminds me of Will to face them. I’d never play them, given how little interest I have in destroying that perfectly good situation I have now. My relationship with Chaos is exclusively adversarial.

Well, that’s all I have for now. I’m going to have a few more rounds with the HR (who I seem to be able to dominate and only fret if facing Dark Eldar). 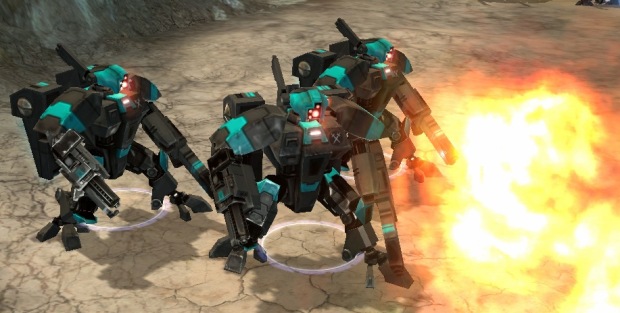